Dear pilgrims, welcome to the pilgrim city of Trondheim! Nidaros Pilegrimsgård is the official pilgrim center in the city. Here everyone is welcome, regardless of the motivation to wander or length of it.

As a pilgrim you can receive the Olav's letter, get your stamp of pilgrimage and receive a mark that gives free entrance to the Nidaros Cathedral. At the same time, we also keep statistics on the pilgrims who visit us.

Our hosts also always offer coffee, a piece of chocolate and a chat 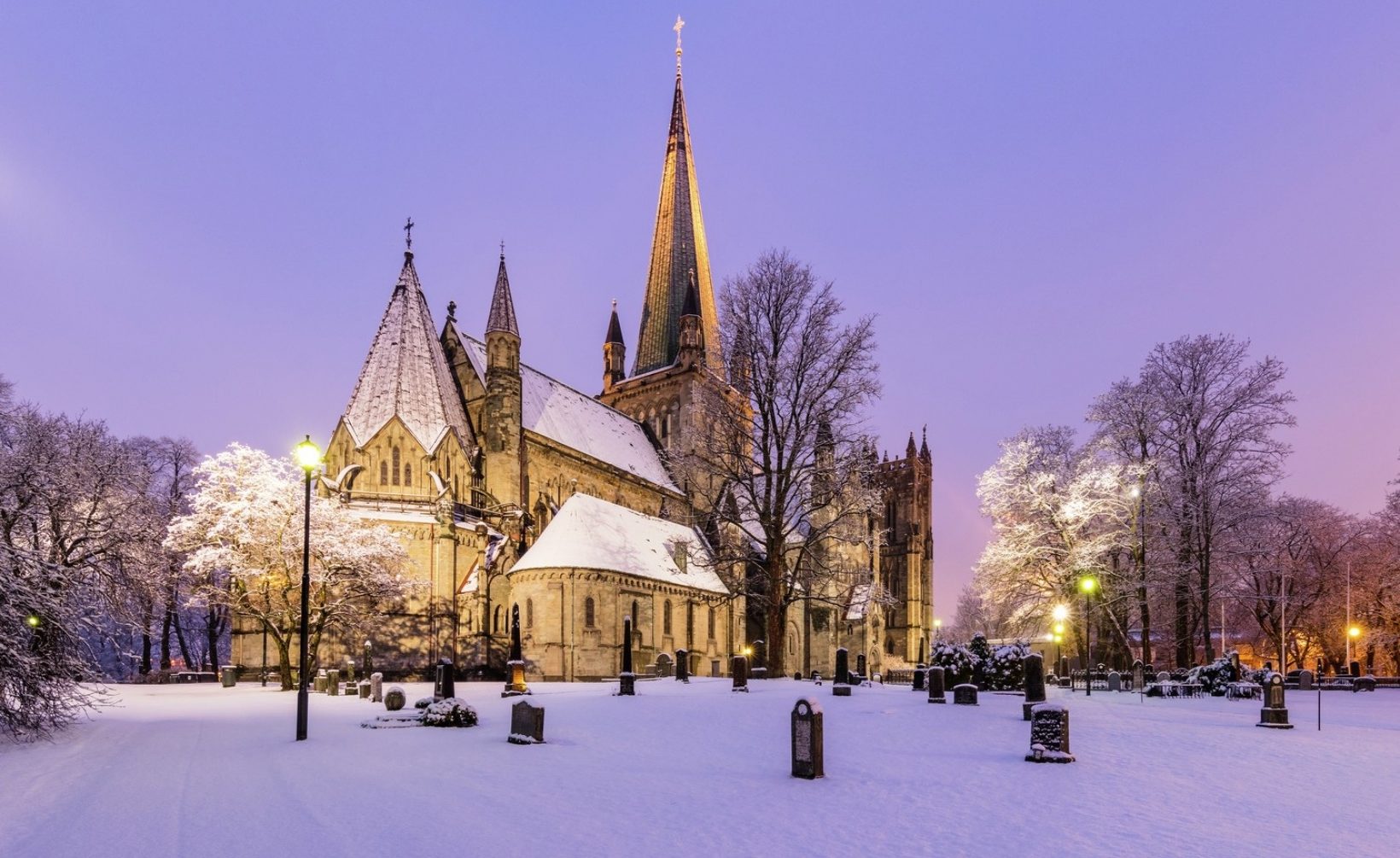 Reaching the goal, the mighty Nidaros Cathedral, is a great experience for many. All pilgrims will be able to visit the Cathedral for free, after receiving an admission mark with us. During the pilgrim season there is also a separate pilgrimage service at 18:00 every day, except Sunday (then it is the usual evening Mass). You can read more about Nidaros Cathedral on their website.

Nidaros Pilgrim center's main task is to be a reception and lodging place for the pilgrims. And being a meeting place between the people of Trondheim and the international pilgrim movement. We are also an info center where future pilgrims can come to plan their pilgrimage in Norway. We also arrange short and long walks along the pilgrim paths in the region of Trøndelag.

The regional leader of the pilegrimsleden is actively working on the development and maintenance of the surrounding pilgrim routes. This includes marking the paths, active contact with the associated pilgrim hostels and accommodations, and developing other needed infrastructure.

Far wandering pilgrims will be offered the letter of Olav at Nidaros Pilegrimsgård. To earn the Olav letter, you have to walk the last 100km to Trondheim.

The letter of Olav is a document proving that the pilgrim has dedicated long days on the Norwegian pilgrim's path. Which means rain, tired legs and thighs, sun, meetings between people and a unique experience of Norwegian nature and culture. The Olav's letter become of great importance to many of the pilgrims, and is an cherised memory of the pilgrim's path. 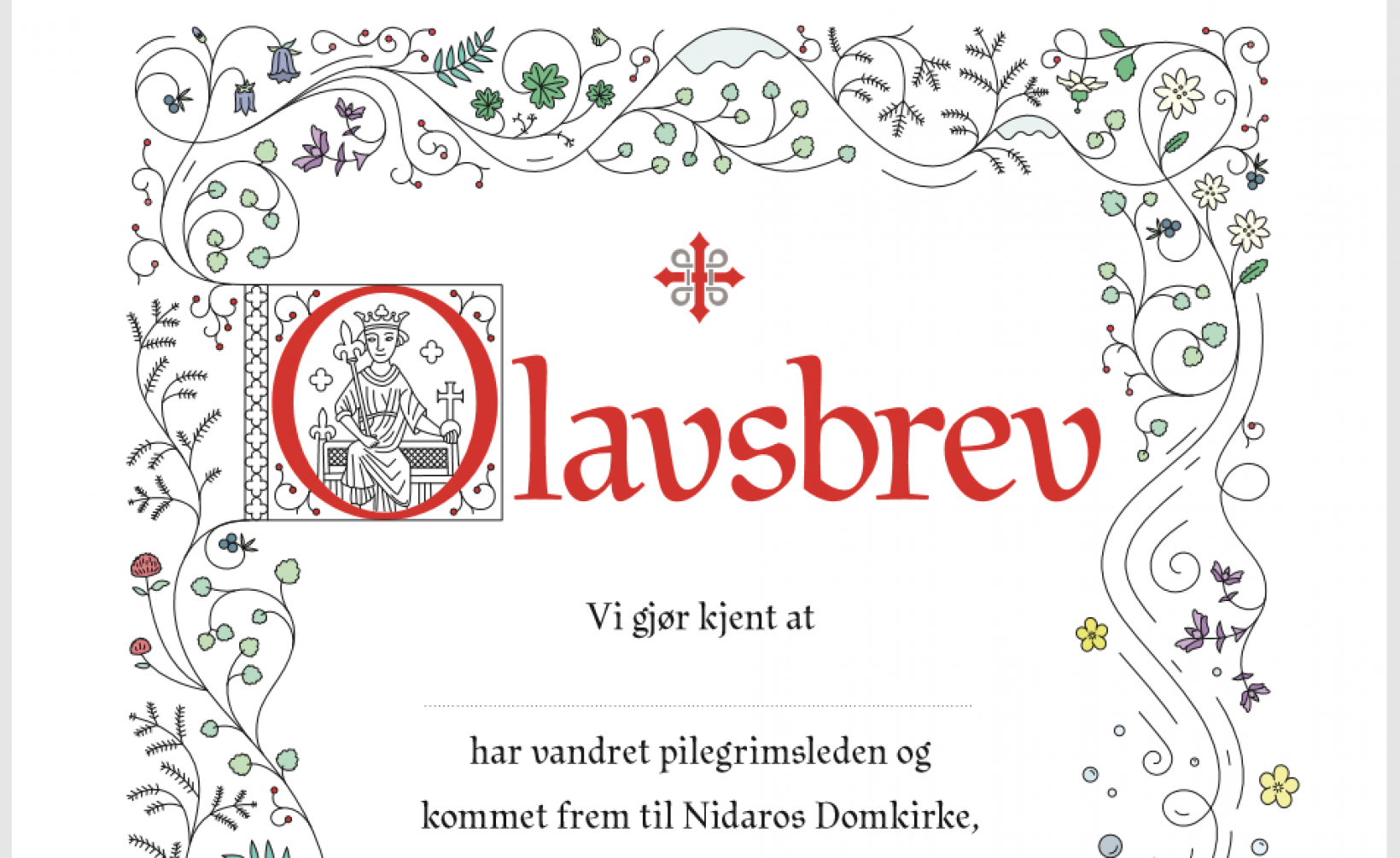 The Norwegian pilgrim passport is the official pilgrimage documentation along the pilgrim's paths. By purchasing and presenting the passport along the way, the passport will provide discounts and benefits along the route. This is especially true to the pilgrims who have reached the Nidaros Cathedral and the city of Trondheim.

The pilgrim passport also becomes the most treasured memory from the pilgrim routes in Norway. Along the path, the pilgrims collect unique stamps from the places they visit. Memories from historic farms, hospitable people and wonderful food from the country's many locations are gathered on one and the same document, which the pilgrim can preserve the rest of their life.

The pilgrim pass gives the pilgrim free entry into Nidaros Cathedral, after visiting us at Nidaros Pilegrimsgård.

The Pilgrim Passport gives pilgrims reduced prices and benefits from our partners in Trondheim. 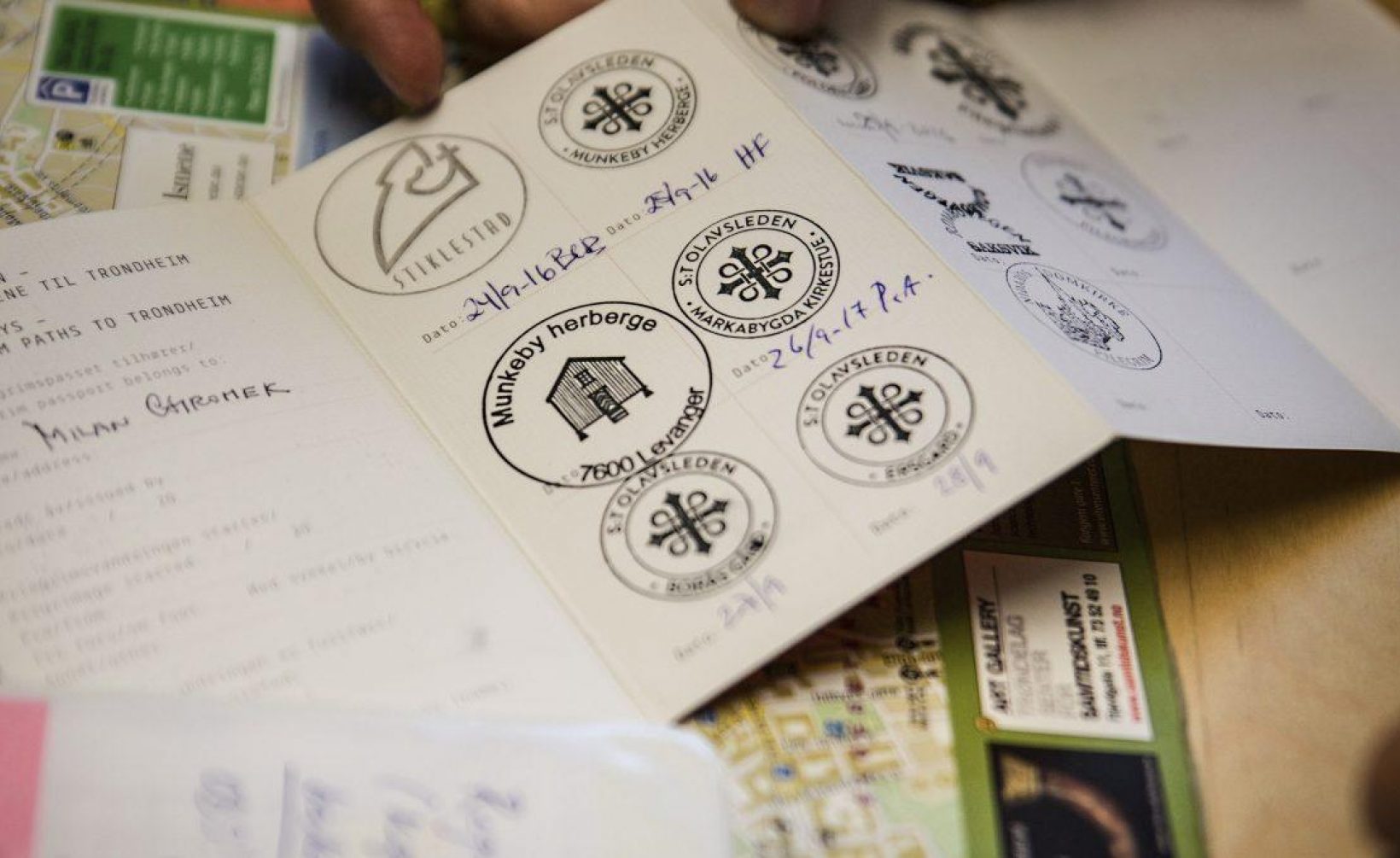 Pilgrim priest Einar Vegge spends much of his time at Nidaros Pilegrimsgård. By knowing the pilgrims paths as his own pockes, and being å good interlocutor, he is an important part of our hosting at Nidaros Pilegrimsgård. After arriving at the finish from a long journey, it may be good to have the opportunity for reflection and a blessing form the pilgrim priest in our warm facilities.

Einar is also the one at Nidaros Pilegrimsgård with the most knowledge of the Olav's heritage history. He leads several city guides during the year, and on these walks one can learn a lot about the local history of Trondheim from the Middle Ages. 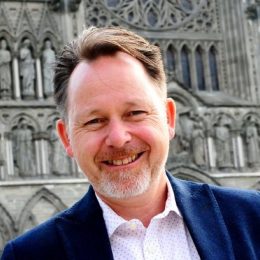 The Pilgrim Community of St. Olav

Our most important partners and an essential part of our hosting is the pilgrimage community of St. Olav (Pilegrimsfellesskapet St. Olav). For many years they have received pilgrims from far and near in our pilgrim reception. Interesting people are drawn to one another, which is why it is always rewarding for the pilgrims as well as for the hosts to receive the good welcome and meeting here at Nidaros Pilegrimsgård. 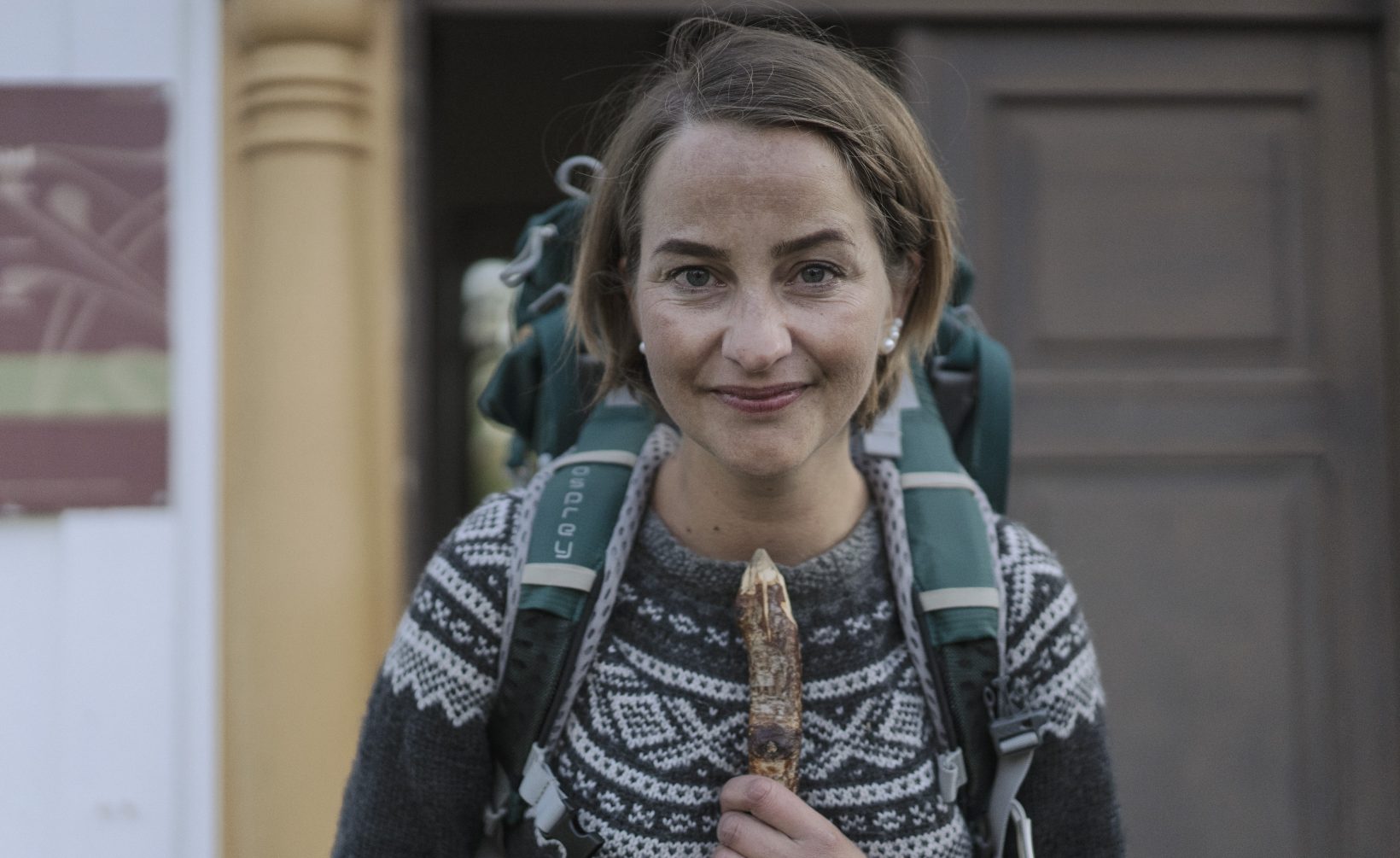 Do you want to volunteer in the pilgrim movement?

We are completely dependent on our many and dedicated volunteers. If you want to meet people from all over the world in our pilgrim reception, take care of our beautiful garden by Nidelven, or maintain and mark some of Norway's oldest roads, contact us! We want to involve as many people as possible in our national initiative.

The pilgrim reception at Nidaros Pilegrimsgård keeps statistics of all arriving pilgrims. This data has been used for research on the pilgrimage tradition and the modern pilgrim initiative. The statistics are also a valuable tool for charting where the pilgrims come from, age and length of the pilgrimages. The typical pilgrim is a German elderly woman who wanders a week on the Gudbrandsdalsleden path. Anyway, we see that pilgrims from 18 to well over 80 use the pilgrim path for shorter and longer hikes. The pilgrims come from all over the world, traveling alone and up to groups of 20.

There is a great diversity of different people and cultures that use the pilgrim paths. Something that show how valuable this initiative can be for green tourism, self-realization and the development of personal networks across borders and views on life. This makes the pilgrim initiative a very rewarding work, and we hope that in the coming years, together with increased pilgrim traffic, the number of partners and stakeholders around the pilgim paths will increase, making this a good example of a sustainable travle product.